Preface To The Picture Show of Nikolai Estis

Thank you for coming here today for this strange and unusual event: The “picture show” of Nikolai Estis.

Those among you who have never seen a picture show like this before probably wonder what it is exactly and how such a strange art form came about. Well, we could easily leave these questions unanswered and start right with the show itself without any preface – as we actually often do -, because art also works without any such prior knowledge. The inner comprehension of art can occur spontaneously and suddenly and does not require a preliminary introduction. Indeed, it is precisely at this moment, when an artwork unexpectedly touches and beguiles us that the strongest sensations, the deepest understandings arise. The only prerequisite is an inner disposition to open us up to the art with a receptive eye and a personal sensitivity to focus on the object in front of us. You coming here today attests to the fact that you are equipped with such a receptive disposition. Therefore, I will keep this introduction brief and refrain from explaining singular works. However, what you will certainly be interested in, is the historical background that lead to the creation of this picture show.

Half a century ago, this form of art presentation came into being in the studio of my father, the artist Nikolai Estis. It was during the Soviet era, at a time of rigorous censorship when every artist who did not conform to the system or was not considered loyal, had to fear not only for their studio or their works, but also for their life. Not conforming to the system meant not following the guidelines of so-called socialist realism as it manifested in the imagery of Lenin on tanks, peasants at the harvest, soldiers defending the border – all in striking red. Avant-garde artists that did not focusing on this kind of visual language in their art had to hide and work in secret.

While my father did not belong to any avant-garde movement, he painted in his own style, just as his mind dictated, and was thus far from conforming to the system. As a result, it was difficult for him to exhibit his art, and when he had the opportunity it had to be done on a pretext. One such disguise was a series of lithographs with illustrations about Federico García Lorca. Lorca was associated with a revolutionary spirit and thus welcomed by the Soviet system.

Nevertheless and despite this censorship, there was great interest in original art. That is why art lovers often came as secret visitors, anxious and mostly alone through the back door of the artists’ studio to experience genuine art where it was created. My father’s studio was in an attic right under the roof with sloping walls that didn’t even allow the pictures to be hung properly. A creative solution needed to be found, so my father began to put his paintings on an easel, one after another. The audience gathered to view the individual images and the sequence. Soon my father realized that not only the works of art themselves, but also the order in which they were presented mattered. So he began to create specific episodes, image sequences that were characterized by an overarching emotional cohesion. But more on that later.

First, an additional element was added to the picture show: one of my father’s friends was a cellist in the orchestra. He had applied for a trip abroad, but was suspected, robbed of his work and excluded from the ensemble. Since he lived with his wife and two children in one bedroom in a communal apartment, he could not play at home. So he came to my father’s studio to rehearse. One day, while he was sitting next to the easel with a painting my father was working on, he began to improvise. Gradually, he immersed himself in the artwork, so absorbed in his contemplation, that the painting itself became like a sheet of music. This is how the sonic component became a sister to the visual presentation in the picture show. In the years that followed, my father would put on such picture shows with a variety of musicians, including Alexander Suslin, who will be playing here on March 4th. Guided by the paintings, these musicians mostly improvised, but sometimes great works of classical music were also included – from Johann Sebastian Bach to Carl Orff. However, it is evident that improvisation is the ideal musical companion for the picture show: While the music does not illustrate every single painting or translate it into music, it is also not independent of the images. Rather, the two art forms occupy a unique common space in which the music follows the same rhythm, the same movement as the paintings.

This concept of movement is central and vital to the arrangement and sequence of the artworks. The paintings are neither arranged according to motifs – even though this may sometimes be the case – nor do they tell a story in any traditional sense. Its narrative is modeled according to colors and lines, based on dynamics, built up by to a certain movement. A certain rhythm runs through the sequences, not steady but continually ascending, and gradually culminates in a crescendo, an elevation to which the viewer is uplifted.

The effect is pretty impressive: a friend of my father’s, a psychologist, used the sequence of images to treat her patients. Once, a patient who had not spoken in a long time watched the picture show. Afterwards, he pushed a bowl of sweets that was standing on the table over to the psychologist and asked her if she would like any.

Often, at the end of the picture show, the viewers request to see the paintings again in reverse order so as to return from the realm of Nikolai Estis’ art. But for now, let us first draw you in. 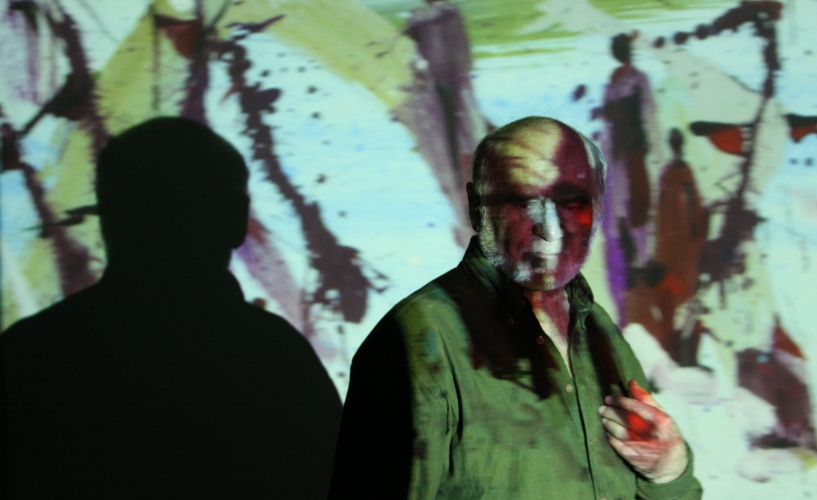 Nikolai Estis’ during one of his picture shows